The Evolution of Vocabulary in Maths Education

'The Evolution of Vocabulary in Maths Education’ is a blog preview of Jo Morgan's #MathsConf19 session/workshop being run at #MathsConf19.

Language changes all the time. Words become obsolete, words are superseded, words fall out of fashion. Through my research into maths textbooks from the last 500 years I have discovered all sorts of delightful and surprising vocabulary. Come along to develop your subject knowledge and (hopefully) to be entertained and amused.

Here are some further thoughts from Jo:

Whatever happened to vulgar fractions?
My Longman maths textbook from the 1960s tells me about the ‘Fraction family tree’. Its members are the brothers Vulgar Fraction, Decimal Fraction and Percentage, plus of course the illegitimate son Ratio who we don’t like to talk about.

This alludes to the fact that during the latter part of the 20th Century the terms ‘vulgar fraction’ and ‘decimal fraction’ fell out of common usage in schools, leaving us with ‘fraction’ and ‘decimal’. With this change in vocabulary I don’t think we have lost any precision – the terms fraction and decimal are fit for purpose. So, although some lost mathematical vocabulary fills me with sadness, I don’t mourn the loss of the word vulgar.

The term vulgar fraction had been in use for centuries before it died out – it can be found in mathematics texts from all the way back in the 1500s. Here we can see it appear in a snappily titled textbook from 1741:

Textbooks from the 1700s and 1800s not only show that the term vulgar fraction was in common usage, but also provide some interesting definitions and explanations.

For example, in “A Treatise on Arithmetic, theoretical and practical” (Loomis E, 1856), we have this explanation: 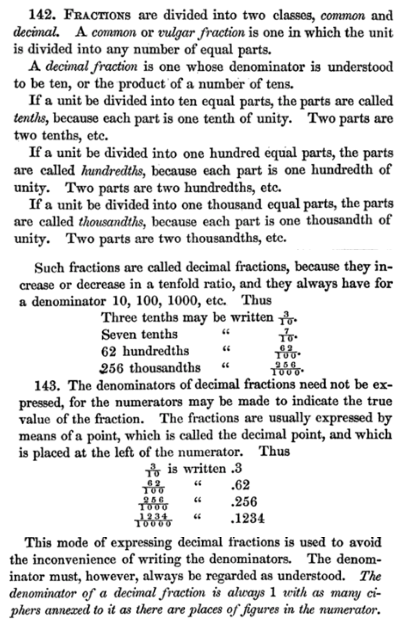 It’s the last part that I particularly like: “This mode of expressing decimal fractions is used to avoid the inconvenience of writing the denominators’. I never thought of it like that. Just like the percentage sign is used as a shortcut to avoid writing a denominator of 100, decimal notation is just a shortcut.

All this talk of vulgar fractions made me wonder about the word vulgar. It’s a rather odd word to use in mathematics. A dictionary gives us the following definitions:

1. lacking sophistication or good taste.
2. making explicit and offensive reference to sex or bodily functions; coarse and rude.
3. [DATED] characteristic of or belonging to ordinary people.

Now I’m pretty sure that fractions don’t go round making offensive reference to sex and bodily functions. Certainly not in my classroom. Clearly the third definition is the relevant one here – the idea of being ordinary or common.

It turns out that the word vulgar comes from the Latin word vulgus meaning ‘the common people’, and it was first used in English in the fourteenth century. It then referred to something that was in common or general use or something customary or done as a matter of everyday practice.

The meaning of the word vulgar changed over time. It started as “relating to the ordinary people” but came to mean “commonplace”, and by the seventeenth century it had become “lacking sophistication or good taste”. One of the only places that the word continued to mean ‘ordinary’ was in mathematics. I think it’s a bit sad that a word meaning “of the common people” came to be associated with crude, uncouth and obnoxious. But I’m not sad that I don’t have to say the word ‘vulgar’ to a room full of teenagers anymore! That was asking for trouble.

In other news, did you know that it’s totally uncool to call a fraction improper these days? Apparently, it’s a bit of an insult to fractions greater than one to suggest they’re not proper… Who knew?

Come to my workshop at #mathsconf19 to hear more about vocabulary that’s changed over the years - lost maths vocabulary can be insightful, sometimes amusing, and always fascinating.

Don't forget in July we also have our 'FREE' Maths Teacher Network events in association with Oxford University Press and AQA.

We look forward to seeing you at our next La Salle Education Event if you don't already, follow us on Twitter @LaSalleEd

Jo is a Lead Practitioner at Harris Federation in London. She writes the website resourceaholic.com where she shares teaching ideas and resources for secondary mathematics. Jo is a member of the TES Maths Panel and AQA Expert Panel and a regular guest on Mr Barton's podcast. Jo absolutely loves talking to maths teachers on Twitter and is always looking to learn from others.